YOUR RIGHTS UNDER THE NATIONAL LABOR RELATIONS ACT

One of the cornerstones of the Act are what are referred to as employees' Section 7 Rights.

These rights apply to nearly every employee working for an employer in the private-sector (except for airlines and railroads) that has two or more employees and engages in interstate commerce.

Employees' Section 7 Rights are as follows:

What Section 7 of the NLRA means for employees is fairly simple:

​Just as importantly, according to the NLRB's own guide to the law, "[t]he Act also contains a provision whereby employees or someone acting ontheir behalf can file a petition seeking an election to determine if the employees wish to retain the individual or labor organization currently acting as their bargaining representative, whether the representative has been certified or voluntarily recognized by the employer. This is called a decertification election." [Emphasis added.]

In other words, you (as an employee) have the right to kick the union out of your workplace and the NLRB is there to protect you.

Here are some things that are illegal that neither a union, nor a company can do: 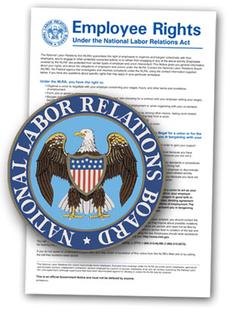